Last night Ji told me that USC Viterbi School of Engineering would hold an Information Session in Shangri-La Hotel this night. And after he told me it I checked my email and found an invitation as well. I thought this was because I filled USC as one of the GRE score free sending. However, Ji told me that this was because we had filled in an application of this session several months before, and then I remembered that he did give me an online address to apply for it not a long time before.

I learned a lot through today’s information session. And the knowledge I gained not only fits USC, I think it will be a help for all of applications in the not far future. After the session I believed that my GRE score is useful enough just as Jiashu told me though not perfect. However, the most significant problem is TOEFL. Ji told me a long time ago that it is easier to get AD from USC among the other universities at the same level. However, the request of TOEFL is a bit higher than others, strictly total 100 and every subject higher than 20. To be honest, I have more confidence than before.

「Modern Family」 has been back and I watched the first episode tonight. It’s not so funny, but it is familiar to me and gave me the feeling of meeting a friend whom I haven’t met for a long time. That is enough already. 「Desperate Housewives」 will come back tomorrow and the last episode of 「Drop Dead Diva」 will be played in tomorrow as well. The new season of American TV series is coming, and I love it. 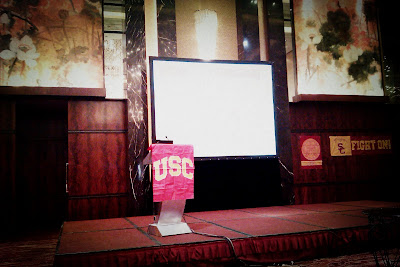