Thanks to the Hurricane Sandy, I've been trapped at home for a whole week. The day before yesterday, my mood went down to the deepest point, and I could not even watch a movie intently. So I did a crazy thing which I hadn't done for several years. That still didn't comfort me significantly, what was worse, even exacerbated the low mood. In that afternoon, I watched a movie called Detachment, which is very black and gloomy. It talks about the life of a temporary high school teacher, who has some heart shadows during his early life. Students at that high school are the so called problem youths. Pressures from his relative, his students and his own life almost drive him crazy. The teacher is acted by Adrien Brody, who always shows the sentiment of gloom. Whenever I felt depressed, I would watch something more depressed to neutralize the mood. It sounds maybe a little bit awkward, but it worked. At that night, I felt better already.

The 7 train resumed yesterday, though I didn't take it to anywhere. However, I thought it was time to go out to talk to people other than my roommates. I found an activity on the Meetup, running in the Central Park. Actually, the New York City Marathon should've been held today. However, the Hurricane Sandy postponed it. The mayor of New York City just announced it the day before yesterday. When I came to the Central Park I saw thousands professional runners there wearing professional runner suit. I didn't know this was because of the marathon or was just a regular view of the Central Park on weekends. Among the crowded people, I finally found the people from the Meetup group.

I bet this is the longest distance I've ever run. What is weird is during the latter trip I hardly felt tired, and I didn't think that was a good sign. During the one-hour run, there were lots of people standing alongside of the road, cheering for the runners though this was not the NYC Marathon. And there were also a lot of people holding cups of water to the runners voluntarily, and some people even supplied fruit and crackers for runners. New Yorkers are warm and kind. 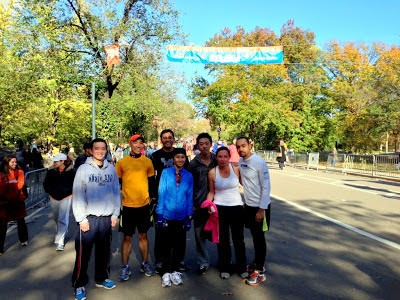 I just finished the book 1984 by George Orwell, I think every Chinese should read at least one book by George Orwell between the 1984 and Animal Farm. 1984 was published in 1949 though, it is like a script of what happening during the Cultural Revolution in China, and some scenarios we can even find in this modern society. The next book I’m going to read is And Then There Were None by Agatha Christie, which is a crime fiction. Agatha Christie is recommended by a literature professor I met some time ago. After I searched her name on Google I found out that the famous movie Death on the Nile was written by her.